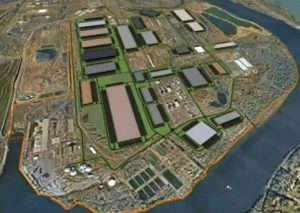 NorthPoint Development Inc. is proposing to spend $1.5 billion to develop an initial 10 million square feet of industrial space on 1,800 acres it is buying from U.S. Steel in Bucks County.

The Kansas City, Mo., developer and owner of warehouse-distribution space expects to close in December on buying the land from U.S. Steel for an undisclosed price. It put the land under agreement in June after being selected by the steel company as the buyer. Once it closes on the land, NorthPoint plans to proceed with a $25 million environmental remediation of the former factory site used by U.S. Steel from 1952 until 1991.

In the meantime, the company plans to work on getting township approvals for the phased development of what it is calling the Keystone Trade Center that will be built at the Keystone Industrial Port Complex along the Delaware River. Developers expect the project to create between 5,000 and 10,000 new jobs.

Though NorthPoint has been working behind the scenes with township officials for a couple of months, it presented publicly for the first time on Oct. 27 a master plan before the planning commission.

The proposal by NorthPoint will greatly accelerate the transformation of U.S. Steel’s Fairless Works site. Though several tenants operate in buildings on the property, a wholesale redevelopment of the nearly 2,000 acres was a lofty ambition that never materialized. Now, with the the rise of e-commerce, brownfield properties such as these have become more valuable as land located in proximity to metropolitan areas and with access to major arteries have become scarce.

A similar redevelopment is set to play out a little more than 30 miles south on Interstate 95. A division of Hilco Global acquired in June the former Philadelphia Energy Solutions refinery and plans to transform its 1,300 acres into 13 million to 15 million square feet of light industrial, warehouse-distribution, last-mile and cold storage space. The Southwest Philadelphia property had operated as a refinery for the last 150 years and shuttered after an explosion and fire at the site in June 2019.

In the nine years it has been in business, NorthPoint has developed nearly 80 million square feet of warehouse-distribution space and raises $2 billion to $3 billion in capital annually to fund its development, said Jed Momot, NorthPoint chief strategy officer.

The private company is the largest landlord to General Motors and includes Chewy, Walmart, Ulta, Federal Express and Lowes among its tenants. It leased to Amazon six million square feet this year alone. The company expects similar tenants to occupy space at the Keystone Trade Center.

Outside of Missouri, it considers Pennsylvania to be its “second home,” Momot said. It owns 15 million square feet in the state mostly along the I-81 corridor between Greencastle and Scranton.

U.S. Steel evaluated 10 to 20 companies that were interested in the Falls site and ultimately selected NorthPoint because it has the expertise and experience to successfully execute on the proposed redevelopment, Momot said. He cited a former Harley Davidson manufacturing plant in York and a coal plant in Wilkes Barre as examples of brownfield redevelopment it has undertaken in Pennsylvania.

NorthPoint is initially proposing 10 million square feet of new development in 18 buildings on the U.S. Steel site to be developed over the next seven years but sees that potentially growing to 15 million square feet that would be built over 10 years. The company foresees eventually gaining additional land and buildings leased to other tenants once those leases expire, Momot said. It would then look to raze those structures to make way for the additional development.

Even at 10 million square feet, the Keystone Trade Center would be the largest along the I-95 corridor and along the Eastern Seaboard, Momot said. The company expects the development to create a minimum of 5,000 new jobs but as many as 10,000 at build out. “I think it will be a shot in the arm for the local and regional economy,” Momot said.

What tax incentives NorthPoint might seek couldn’t be determined. The property had been designated as a Keystone Opportunity Zone, which provides various breaks on state and local taxes.

NorthPoint expects to construct structures between 200,000 square feet and upwards of 2 million square feet as it continues to see tenants wanting buildings that large. Most of the development will take place on speculation, meaning without a tenant secured.

The company plans to move ahead during the early part of next year on 1.5 million square feet of speculative space in a couple of buildings. “NorthPoint has an aggressive timeline,” Momot said.

NorthPoint’s plans were well received by Falls planners and will proceed to the township’s supervisors for approval.

The company already has a presence in the region. NorthPoint signed a lease for a division of DHL International to occupy a 465,000-square-foot industrial building it is constructing at 11601 Roosevelt Blvd., a project that is helping to reshape Northeast Philadelphia into as a regional distribution market.